MADISON, WIS.  Deer harvest numbers are down across the country this year for a few different reasons.  While many people are coming up short this part of opening firearm season, a 104-year-old woman in Wisconsin shot her first buck on opening day.

There are several reasons why deer harvest numbers are down according to Schaller.

Teeters was hunting with her son, who said it was her idea to get her license. She showed up acquire the license sporting a hunter red plaid coat.

Schaller said Teeters apparently is living life to the fullest and that is what deer hunting is about.

The Missouri Department of Conservation reported there were 21,802 less deer shot during this November’s firearm season than there was last year. 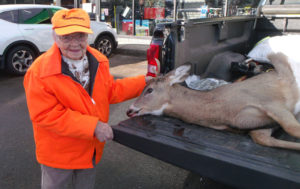