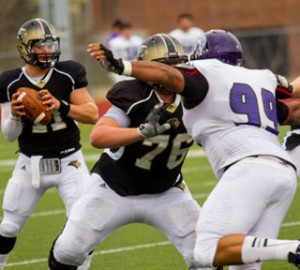 Executive Director Roger Siegel talked about the origins of this collegiate match-up.

“Back in the 40’s, when the Quarterback Club started, Excelsior Springs had a real good high school football team and MSHSAA did not have high school playoffs at the time. So, they thought they would bring one other high school team into Excelsior to play Excelsior…to find out who was the best team in the state,” he explained.

“That’s how it got started and then the Missouri State High School Activities Association said no more postseason for high schools, then they moved it small college. Then in the early 90’s we went to Junior college and then in 2000 we moved it up to Division II.”

“Sioux Falls comes in at 10-1 led by their quarterback who is the Northern Sun Intercollegiate Conference Player of the Year,” he said.

“UCO is coming off a pretty impressive 8-3 season after they were 2-8 the last two years in the MIAA, so it should be a pretty interesting ballgame.”