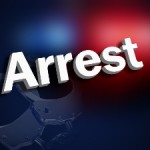 Missouri State Highway Patrol, Jimmy T. Jackson, 23, of Seymour was stopped just after 10:30 p.m. last night for failing to display valid plates on a vehicle. It was then determined he was operating the vehicle without a valid drivers license. During his arrest, Jackson was alleged to have been in felony possession of a controlled substance and unlawful use of drug paraphernalia.

Jackson was being held at the Henry County Jail until he could post bond on the charges.

Mo. Soldier to be Honored