PRESS RELEASE: (Missouri Department of Conservation) — The Missouri Department of Conservation (MDC) is expanding the peregrine falcon nesting program in the Kansas City area, thanks to public and private partnerships. Placing nest boxes for falcons high on skyscrapers or smokestacks is helping these dynamic raptors move closer to removal from Missouri’s endangered species list. One nest has a camera streaming video of a nesting pair incubating eggs, and another nest may be online soon. 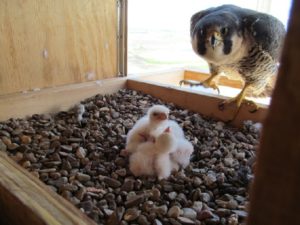 “The falcons are currently laying eggs,” said Joe DeBold, an MDC urban wildlife biologist who also manages Missouri’s falcon recovery program. “Egg incubation will take about 30 days and will take place most of April and into early May. Hatching will commence in May.”

People can watch the progress online until the young birds fledge in mid- to late June. The furry young chicks, called eyasses in falcon lore, are helpless and vulnerable as parents begin bringing them food. But they quickly grow, add feathers, and wander around the nest as the days pass.

Peregrine falcons historically nested on cliffs and ledges. They nested in the Missouri in the 1800s in limited numbers. But they were gone from the state as a nesting bird by the early 1900s because of habitat loss, nest disturbance, and the persecution of raptors before people understood their beauty and value to ecology. Falcon numbers plunged nationally after World War II as the pesticide DDT in the food chain hindered reproduction. But once DDT was restricted, biologists began to reintroduce falcons in urban areas where ledges and roofs of tall buildings mimicked cliffs.

MDC released young falcons on the roof of Commerce Tower in downtown Kansas City in 1991 and 1992. In 1997, a falcon pair at Commerce Tower successfully hatched and fledged young falcons. The acrobatic flying falcons have increased in numbers during the past 22 years, and MDC has added nest boxes to keep the population expanding. Since nesting falcon numbers are growing, biologists hope they can be removed from the state endangered list during the coming decade.

The nest box at American Century Investments can be viewed online at https://short.mdc.mo.gov/ZNY.

A camera may be coming online soon for the nest box at KCP&L’s Iatan Power Plant north of Weston. For information on peregrine falcons in Missouri, and updates on falcon cameras, visithttps://short.mdc.mo.gov/ZZJ.

Anyone spotting falcons nesting on bluffs, ledges, or in unusual places such as bridge trusses is asked to contact Joe DeBold at [email protected] 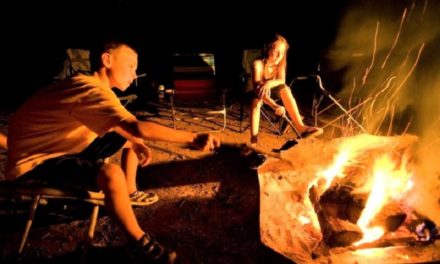 True Armyworms Are On The March