An accident in Boone County was fatal for a Columbia driver

BOONE COUNTY, Mo. – Misjudging the distance between vehicles may have caused a fatality crash in Boone County Thursday night. 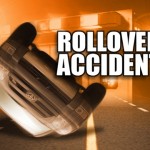 Missouri State Highway Patrol, Stacey L. McCrary, 46, of Columbia was westbound on Interstate 70 in the driving lane near Route UU with a vehicle in the passing lane driven by Randy Ulman, 55, of Jacksonville Florida. McCrary attempted to pass Ulman and struck the front of Ulman’s vehicle. The impact caused McCrary to travel off the left side of the highway, strike a guardrail and overturn. While overturning, the vehicle struck the median cable barrier before coming to rest in the eastbound passing lane.

McCrary was pronounced dead at the scene and no other injuries were reported.