MISSOURI — The Missouri Department of Conservation is asking for help in finding those who shot a bald eagle in Washington County that later died. 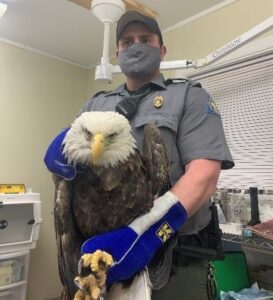 According to the department, the bird was found at the intersection of Highway C and Z in the southern portion of the county. Conservation Agent Jaymes Hall was contacted by the U.S. Forest Service Office in Potosi about the wounded animal. The eagle was transported to the World Bird Sanctuary in St. Louis County.

Gunshot wounds were noticed through the joint of where the wing and torso connect, thus leading to a dislocated and fractured wing.

A veterinarian attempted to perform surgery but found it inoperable. The bird had to be euthanized. The department says the eagle was likely shot either Feb. 3 or Feb. 4.