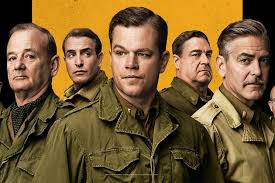 “The Monuments Men” features a cast of stars, including George Clooney, John Goodman, Bill Murray, Cate Blanchett, and Matt Damon. Some of the real-life people these actors portray came from Missouri.

Mackenzie Mallon, a Department Researcher at the Nelson-Atkins Museum of Art in Kansas City, has studied this group of historical figures.

“The Monuments Men were a group of about 350 men and women who were in the armed forces during World War II, and were charged with the protection and the discovery and restitution of art works that had been looted by the Nazis or damaged during the war,” said Mallon.

Six of those men were affiliated with the Nelson-Atkins. Two of them were employed by the museum before going oversees to rescue and protect art.

Others came from St. Louis, and one became a professor at the University of Missouri. Their efforts were crucial in protecting art from German forces.

“As Nazis overran Europe, they looted various kinds of art objects,” said Jim Van Dyke, an Associate Professor of Art History at the University of Missouri. “Both for personal collections and gain, but also because they had this hope to build this giant museum that would showcase their cultural, political, and military supremacy.”

They had millions of objects taken from museums and private collectors, especially Jewish collectors.

As the war progressed and became worse, the Nazis would often hide the art in places such as salt mines and castles. The Monuments Men worked to find these works and restore them to their original owner.

GIPSA Rule to Get Cost-Benefit Analysis