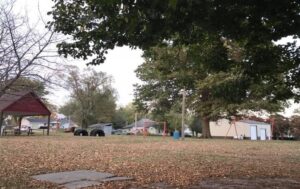 BOGARD, Mo. — Corinne Hundley has been working to improve outdoor activities for the Bogard community since last fall. After taking her kids to the local park and seeing the condition of the playground equipment, she knew something had to be done. The park trips led to the inception of the Bogard Park Board. Corinne explains.

Through hard work and determination, Corinne took the steps necessary to create the Bogard Park Board.

When KMZU last spoke with Corinne about fundraising for the park’s new playground equipment, the board had set a goal of ten-thousand dollars. The Bogard Park Board has applied for a matching grand through the government. If approved, the grant will match the amount of funding that is raised for the park. Hundley says that’s still the plan.

Hundley says the original goal has been more than met. Currently, donations sit at $10,500. What excites her is the fact that the board has until February of 2022 to continue to collect funds for the board’s part of the matching grant. The more funding the park board can receive, the more improvements it plans to make. Therefore, even though the first goal has been surpassed, the Bogard Park Board continues  to collect donations for the new park. Multiple ideas have been exchanged between park board members for additional  upgrades that can be made to the area’s park. Corinne talks about how much the grant the board applied for could potentially be matched.

The park project is especially important to Hundley because she believes its important for kids and adults, alike, to spend less time on computers, phones and television and more time enjoying family, nature and neighbors.

The Bogard Park Board founder says, “we’re so appreciative of the support so far and anything else people can give, big or small, will help make this dream a reality.” She’s also delighted that those who have donated will get to see where their money is being spent.

You can also find information about the Bogard City Park here.

Refund Anticipation Loans Not Worth It