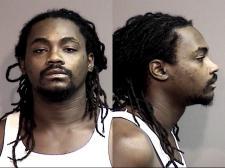 BOONE COUNTY, Mo.- According to a press release, yesterday, December 1, 2016, a deputy with the Boone County Sheriff’s Department initiated a traffic stop on a black van for a traffic violation.

The vehicle failed to stop for the deputy and continued through a subdivision. The vehicle traveled into a parking lot behind one of the residences and the driver fled on foot.

The vehicle was left in gear and rolled towards the pursuing deputy as he was getting out of his vehicle. The deputy was able to move out the way and not be struck by the suspect vehicle. The suspect’s vehicle struck the deputy’s vehicle and then continued and struck a parked vehicle.

The suspect, Dennis C. Collins Jr., was located in a nearby residence and taken into custody without incident.

Collins was arrested and charged with felony driving while revoked, 2nd degree assault on law enforcement officer, 2 counts of leaving the scene of an accident, felony resisting arrest, a probation and parole violation warrant, as well as a Jefferson City municipal warrant.

Tractor-Trailer Blocking Both Lanes of Highway 240

Bridge Study Results to be Released