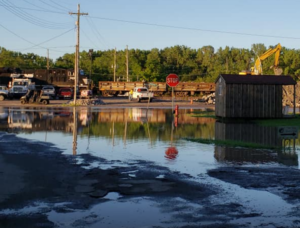 City officials say the advance of water from the southwest, to the north east into town also resulted in the shut down of electric lines by KCP&L. The shutoffs include Burlington, Knappenberger, Bragg, and Garvin Streets. The power company says they will only turn off electricity at the nearest cutoff if homes have water inside. Elsewhere in Brunswick, the power has been left on.

Utley to Appear in Court