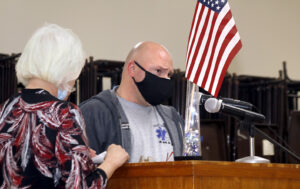 CCAD Director Mario DeFelice with board president Caren Bittiker at the October monthly meeting. He did not attend November’s meeting. (KMZU)

CARROLLTON — On Monday, Carroll County Commission offered $60,000 in COVID-related grant funding to Carroll County Ambulance District. It only took a few hours for a response from CCAD Director Mario DeFelice to soundly reject it.

Presiding Commissioner Stan Falke, who’s in isolation for mild symptoms of COVID-19, tells KMZU he was dismayed at the response.

“(It’s) unprofessional for a public servant to close his response by saying do not ever contact this office again, or something to that effect. I guess, (I’m) flabbergasted, maybe that’s the right word,” Falke says.

In an email viewed by KMZU, DeFelice tells the commission “not to have any further contact with my office regarding this situation as it deemed unwelcome and unwarranted.”

“The requested amount was $212,000 and not $60,000! This doesn’t even comes close to what we need!” he writes, accusing the commission of withholding money at the peril of county residents.

DeFelice appears equally offended the CARES Act funding came with conditions, calling it a “quid pro quo.” In the offer CCAD would’ve signed a “clawback clause,” an agreement to repay the money if an audit finds misuse of funds, like other recipients were required to do, Falke says. The unique aspect was for the district to support an ambulance license for Carroll County Memorial Hospital to run its own hospital transfer service. That caveat was approved by the Carroll County CARES Act Committee as well as the commission.

DeFelice says he is referring the matter to the district’s attorney, an attorney general and office of inspector general. Falke says the commission was in its legal right.

“Commissioners have the sole authority and responsibility for distributing the Covid funds. We obviously want to put it in places where it will do the most good in our community. That’s our decision,” Falke says. “So, yes, we put conditions on virtually every recipient.”

DeFelice also rebuffed the proposal to allow the hospital to operate its own ambulance for hospital transfers. According to Carroll County 911 Center records, the ambulance district declined ambulance service this month to the four known Covid-positive patients at Carroll County Memorial Hospital to higher care facilities. The hospital had to find other medical transport services, according to hospital CEO Jeff Tindle.

In recent months, ambulance service requiring care beyond EMT-Basic services has become increasingly unreliable, according to Tindle. Call history logs indicate among the 14 ALS (paramedic) crews requested by CCMH in July, nine were denied. In August and September, nearly all ALS crew requests by CCMH were declined — many of those patients deemed emergent.

Tindle and CCMH board of directors are asking the state to intervene to grant a license for interfacility transfers. Another possibility, according to a state EMS official, is to conduct a necessity hearing to establish the need, with the Bureau of EMS in attendance. 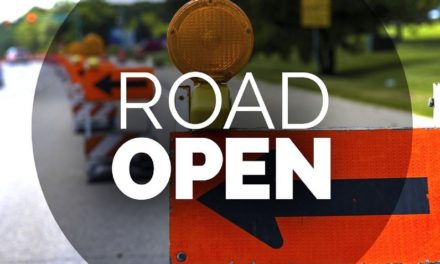