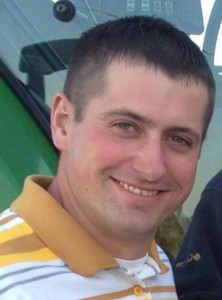 (JEFFERSON CITY, Mo.)–Matt Lambert of Brookfield, Mo., was recently elected to the Missouri Corn Merchandising Council (MCMC) board of directors by growers in District 2. Lambert begins his service to corn farmers effective Oct. 1.

“It is an honor to be elected by fellow corn growers and represent them at the state level,” said Lambert. “I look forward to working with a diverse group of corn farmers and industry partners to strengthen markets for Missouri agriculture.”

Lambert farms near Brookfield, Mo., with his father and grandfather. The family raises corn, soybeans, wheat, alfalfa and hay. Matt and his wife Kate also maintain a flock of registered Hampshire and Tunis sheep along with a 70 head beef cattle operation. Matt is an active member of the Linn County Farm Bureau and has represented sheep producers for the past four years as a member of the Missouri Sheep Producers board of directors.

Lambert replaces Rob Korff of Norborne, Mo., on the MCMC board of directors. He will be nominated to the Missouri Corn Growers Association (MCGA) board at the organization’s annual meeting in January.

The MCMC board of directors is comprised of 14 farmers elected from across the state. This volunteer board was formed in 1984 with the passage of a corn checkoff and is dedicated to market development, research and education. MCGA is a grassroots organization of more than 2,500 members dedicated to increasing the profitability of corn production through sound policies, continued market development and strong involvement in the political process. To learn more, visit www.mocorn.org.