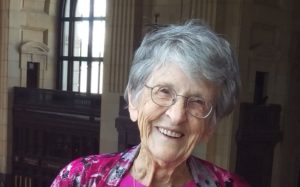 A funeral service will be held at 9:00 a.m. on Monday, September 23 at the Corder United Methodist Church. Interment will follow the service in the Missouri Veterans Cemetery, Higginsville, MO. The family will receive friends from 2:00 – 4:00 p.m. on Sunday, September 22 at Hoefer Funeral Home in Higginsville. Memorial contributions may be sent to Lafayette County Cancer Coalition or Corder United Methodist Church.

Born Monday, May 19, 1924 in Marshall, Missouri, she was the daughter of the late John Buck and the late Nannie Buck (Price).

Dorothy graduated from Marshall Missouri High School in 1942. She moved to Corder Missouri in 1956 where she dedicated herself to being a mother and homemaker. Dorothy was an active member of the Corder United Methodist Church. She spent more than 20 years being part of the American Cancer Society and was the last surviving of six siblings.