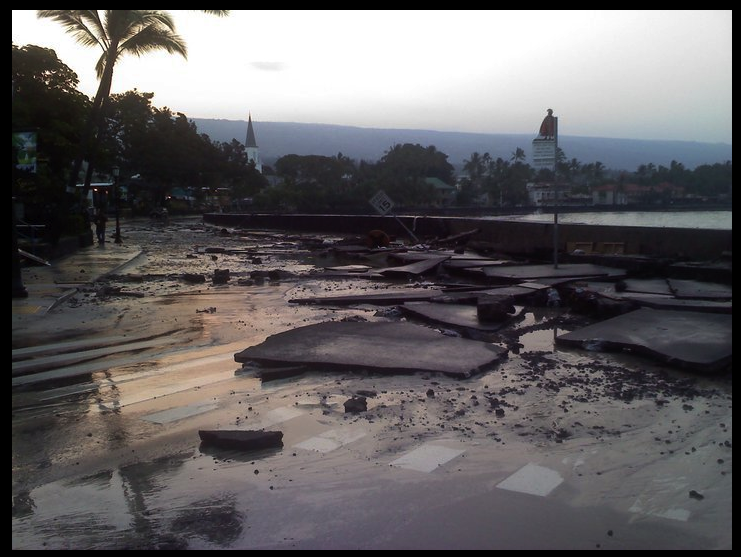 The tsunami that slammed Japan’s eastern coast hit Hawaii early Friday morning.  Waves are spreading along the island chain’s coast.   As sirens sounded throughout the night, Hawaiian beaches were overtaken by large waves, sparking evacuations throughout the Pacific.  Former Excelsior Springs resident Sherry Ortiz has lived on the big island of Hawaii for about 24 years now.  She said the powerful waves don’t pose an immediate threat where she’s at, but warnings have been issued.  “They have been really good at making everyone aware.  Last night, I was watching it on tv and they were already telling everyone to evacuate.  Usually we have four hours to get to evacuation areas.  I can hear sirens,” said Ortiz.

Ortiz watched from her balcony as some of the waves crashed into the shore.  “The water pulls out and exposes the reef on the ocean floor.  I’ve never seen anything like it.   It’s kind of scary.  We are probably in about the fifth or sixth wave.  If you compare it to the 1946 Tsunami,  the tenth wave was the most devastating.  I’m paying attention.  You never know with Mother Nature,” adds Ortiz.

Roadways and beaches were empty as the tsunami made it’s way on to the coast.  The main airports on at least three of the major Hawaiian islands have been shut down as a precaution.

Click here to see live footage of the storm

It’s the second time Hawaii and the U.S. west coast faced the threat of a massive tsunami. An earthquake in Chile spawned warnings last February, but the waves were much smaller than predicted.