Few names are more recognized in the Angus business than Ray Sims. The famed cattle auctioneer transformed purebred cattle auctions from simple events to fast-paced, entertaining productions that generated profitable results. Ray passed away in 2012, but his legacy lives on in the Angus breed through the Ray Sims Angus Scholarship Endowment Fund and all of the lives he has touched.

“Ray Sims will be held in high regard for his auctioneering at Angus sales, but he will be remembered far longer for his genuine interest and compassion in the well-being of the Angus breeders and their families that he developed life-long friendships with, and frequently auctioneering for the second and third generation in those Angus programs,” Jenkins says.

During his career, Ray traveled throughout the United States, selling for both large- and small-livestock breeders, including U.S. senators and three U.S. presidents. It’s estimated that he conducted more than 7,000 auctions, which were mostly registered Angus sales.

In 2010, Ray Sims became the first auctioneer in more than 50 years to receive the prestigious Saddle and Sirloin Club’s Portrait Award. Once expenses were covered for Ray’s portrait now on display in the Saddle and Sirloin Portrait Collection in Louisville, Ky., the Ray Sims Portrait Committee donated the remaining funds of more than $20,000 to the Angus Foundation to establish the Ray Sims Scholarship Endowment Fund for Angus youth scholarships.

Traveling to the NJAS to present the scholarships was always a special occasion for Ray and Melva. They enjoyed meeting and getting to know the outstanding Angus youth selected to receive the scholarship. The recipients of the Ray Sims Angus Scholarship will help carry his legacy into the future and will always owe a debt of gratitude to Ray for his impact on the Angus breed and cattle industry.

Chris Sankey, American Angus Association® board member, says the couple believed the Angus Foundation was a natural organization to be involved with, because they both felt this was a place where they could make an impact for youth.

“I know this means a lot to Melva and the Sims family,” Sankey says. “Not only to honor the memory of Ray, but also as an opportunity to carry on his legacy and develop that passion in young people for generations to come.”

In 1985, the NJAA Board of Directors established the Honorary Angus Foundation to recognize and thank those who have shown incredible support of Angus youth. Seven Angus breeders were honored as the first inductees, and each year the NJAA honors a maximum of three individuals. Any member of the American Angus Association is eligible to nominate individuals or organizations for the Honorary Angus Foundation. A complete list of members can be found online.

For more news and information from the 2013 NJAS, visit www.ANGUS.org to find contest results, awards, scholarships and show photos. Backdrop and candid photos are available for purchase online. Coverage is available on the NJAA Facebook page, as well. 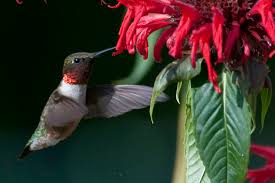 Return of the ruby-throated hummingbird

Agriculture Has Answers to Climate Change