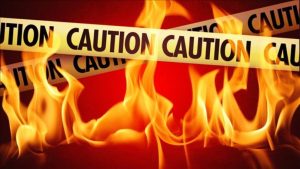 CHILLICOTHE, Mo. — The Chillicothe Fire Department responded to a propane grill and a deck on fire at 6:37 last night.

According to a press release, firefighters responded to a residence in the 1700 block of Derringer Street. When they arrived, an off-duty firefighter was attempting to put out the fire with a garden hose.

The firefighters quickly decided to let the propane bottle grill burn under their supervision since the propane leak could not be stopped.

The homeowner stated he had lit the grill and went back inside to prepare the meal. The deck and the grill both caught fire while he was inside.

The grill was a total loss and there was damage reported to the deck and a nearby hot tub. No injuries had been reported.