COLUMBIA, Mo.- Mizzou Men’s Basketball head coach Kim Anderson has announced that Montaque Gill-Caesar will not return to the Tigers’ roster for the 2015-16 season. A back injury slowed a promising freshman campaign for Gill-Caesar, and he has yet to rejoin the team for summer workouts.   A top-50 recruit coming out of high school, is transferring after averaging 9.1 points and 3.0 rebounds as a freshman last season.  “We wish Montaque the best,” Anderson said. “In an evolving conversation this week, Montaque informed our program of his future plans. He intends to resume his education and playing career at a different institution. We will assist him in every way possible in that transition, pending the completion of academic obligations he committed to with our staff. Our program cannot thank Montaque and his family enough for being a part of the Mizzou Basketball Family.” 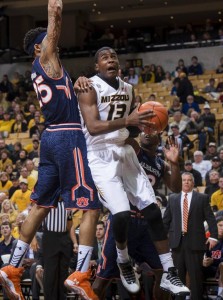 Gill-Caesar is the second known player transferring away from Mizzou and Kim Anderson’s program, as Jonathan Williams III transferred to mid-major powerhouse Gonzaga back in May. “I want to thank the Mizzou Basketball program for its support, as well as thanks to all of the fans and people of Columbia who made me feel so welcome,” Gill-Caesar said. “I’d like to continue my college basketball career at a school where I am most comfortable. I certainly hope to see plenty of success for my friends on the team and the Mizzou coaching staff in the future.”