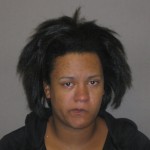 A hearing was scheduled today for a Boonville woman accused of killing a child.  Treschell Kemp, 24, has been charged with involuntary manslaughter, domestic assault, endangering the welfare of a child, and abuse of a child – resulting in death.

She was charged in May after emergency responders were dispatched on a report of a child not breathing.  The 11-week-old was later pronounced dead.  Kemp will next appear April 8th.  She is being held on bond of $250,000.