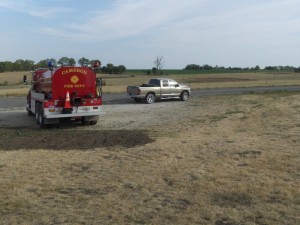 Update 7:45:  The blaze has been at least 75 percent contained.  Authorities report it was started by a tractor that caught fire.  The flames spread about 2.5 miles in a straight line, jumping three gravel roads.  An estimated 500 acres were affected.

A KMZU listener called in about 3:15 Thursday afternoon and reported a large grass fire north of Braymer near Sue Line and Black Oak Roads. Braymer authorities have confirmed the report. All of Caldwell County crews are on scene and help has been called in from surrounding communities. The fire is spreading northward towards several structures. The caller reports that people in the area are being evacuated as a precaution. We’ll bring you updates on this developing story as they become available.