Huskers Squeak Out Win at Home 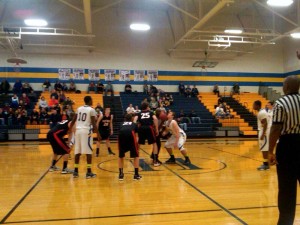 Knob Noster’s David Barton faced the Husker’s Brett Nolte in the opening tip-off for what would be the closest game Lafayette County would have so far this season.

The Panthers won the tip off and jumped out to a 5 point lead, which Lafayette answered to tie it at 5 all. The Panthers would go up 5 again on the back of Junior Brent Marsh who dropped two 3 pointers on the Huskers in the first half.

Lafayette County would eventually go on a small run and at the half the Huskers were up 25-21.

In the second half Knob Noster would continue to dog the Huskers forcing them into sloppy plays and miscues. The lead would change hands a few times, but by the final three minutes the Huskers held a 5 point lead which shrunk to 2 after Senior Ryan Keckler dropped a crucial three pointer. However several missed opportunities at the foul line doomed the Panthers to a 45-50 defeat.

This was the slimmest margin of victory so far this season for the Huskers who previously had won by 20 or more in most of their first 8 match ups and as little as 14. The Panthers were able to work around the usually stifling full court press of Lafayette County, and the Panthers played a good defensive game as well.

The Panthers fall to 4-3 on the season and will face Clinton at home Thursday evening.

The Huskers remain undefeated at 9-0 and will host Lexington Friday night.