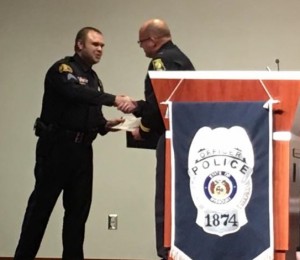 At the banquet, 83 valor awards were presented to officers throughout the greater Kansas City area; 12 of those awards going to officers in the Independence area.

The Bronze Award recognizes an officer who performed with an exceptional act of duty, bringing credit to both that person and his or her agency. Bronze Award recipients from Independence: Officer Desiree Abraham, Officer Jack Taylor.

The Silver Award goes to an officer who has performed a dangerous or distinguished act that far exceeds the performance normally expected. Silver Award recipients from Independence: Officer Joseph Hand, Officer James Combs.

The Gold Award, recognizing an officer who has performed an exceptionally valorous act, far above what is normally expected and with great personal danger present. Gold Award recipient from Independence: Evan Bateman.

The Officer of the Year Award was also presented to an Independence Police Department member, Officer Evan Bateman.

The previous day, an Independence Police officer, Sergeant Seth Bosch, was recognized by the National Alliance on Mental Illness-Kansas City, as the Crisis Intervention Team Officer of the Year.

Bosch is said to have spoken with a subject posed in a jumping position on a bridge, for over an hour, calmly and positively; eventually coaxing the person within reach before grabbing him and removing him from the bridge. Bosch is credited with saving the man’s life through his calm actions in a stressful situation.