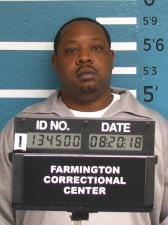 COOPER COUNTY, Mo. — An inmate at the Boonville Correctional Center is facing a manslaughter charge after he allegedly struck and killed another inmate at the facility October 14.

According to court records filed in Cooper County Wednesday, George Walter Black, 34 was involved in a physical altercation with another male inmate at the Boonville Correctional Center on Sunday, October 14.

Documents show that Black allegedly struck his victim, who was not named in court records, in the face with a closed fist.

Witnesses to the incident told investigators that the victim fell to the ground and hit his head before he lost consciousness. He was pronounced dead after he was transferred to University Hospital in Columbia.

Eyewitnesses said that Black had been confrontational with his victim prior to the altercation and had attempted to start a fight before he threw a punch.

He remains behind bars at the Boonville Correctional Center, where bond on the allegation was set at $50,000, cash or surety allowed.

Probation Revoked Due to New Charges