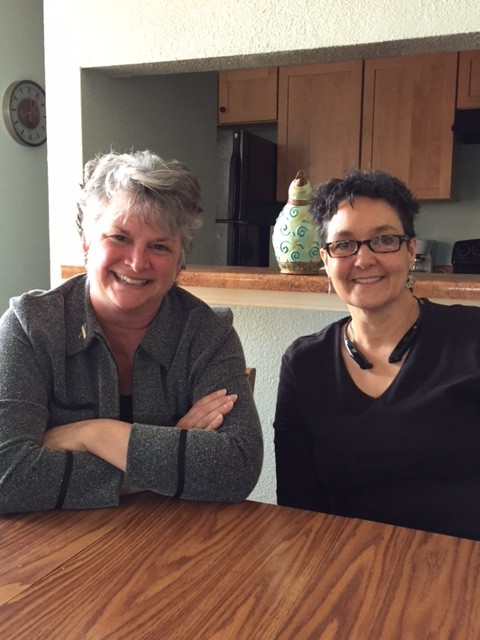 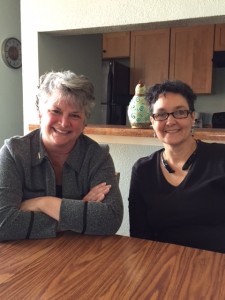 KANSAS CITY, Mo.– At the corner of 27th and Charlotte, in the heart of Kansas City, a red brick building stands silent. Bright blue shutters overlook the sidewalk. A man tugs at his leather jacket and darts across the intersection. A Metro bus rumbles down the road.

Kelly Wilson punches in a code and opens the door. The bustle of activity instantly fills the air. Spools of colored thread sit on shelves, scissors, pencils and push pins are strewn on work benches, and bolts of fabric are stacked tight under a table.

Wilson stands in the center of the workshop, hands on her hips, exhales and smiles. “Here it is,” she says.

She opened Weave Gotcha Covered 10 years ago with her partner Lonnie Vanderslice. While working at a local fabric store, Wilson was also working out of her partner’s home creating draperies. When her home business grew, Wilson had to make a decision: to work for someone else or work for herself. She left the local fabric store and says she gave 100 percent of her attention and efforts to Weave Gotcha Covered.

She says employing women in need had always been a part of her company’s vision, and partnering with Amethyst Place was an opportunity to make that a reality.

Amethyst Place is also home to the 100 Jobs for 100 Moms Program, a vision of Sister Berta of Operation Breakthrough. This program seeks to employ 100 single mothers at local jobs, further aiding their recovery process. 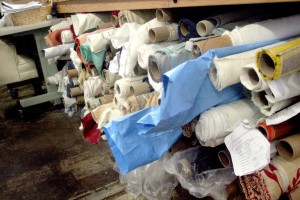 “I was at the luncheon as they were speaking about the program,” Wilson explains, “and they got to the end and Sister Berta said, ‘Who here is going to give a woman a job?’ I thought, well, I can. I had no idea what that job was going to be. I didnt really have an opening, but I thought we could figure something out, and that started it. We hired one in October, December and February.”

Wilson says she had always envisioned employing struggling mothers because she herself was a single mother encountering her own set of struggles. With a child who attended school around the corner, Wilson says her employer at the time wouldn’t allow her to bring her daughter lunch money that she needed.

“I wasnt allowed to take her lunch money,” Wilson said, “and I didn’t like that feeling of someone else controlling me for five dollars an hour and my kids not be 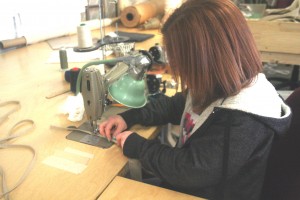 ing able to have what they needed. That was really impactful for me.”

Weave Gotcha Covered is a fairly new member to the heart of the city. Originally located in Gladstone, the entire operation was picked up and moved two blocks away from Amethyst Place last February, to be closer to the women employed there.

Wilson said her decision to relocate her entire business was solely to help the moms get to and from work easier.

“It’s not about me,” she said. “The bus ran once an hour to northland, it would take hour and a half then back home. That cut out two to three hours a day the women could be working and having an income. Then, if the school called and they had a sick child, they had to wait until the next bus came the next hour and do that whole process in reverse. We weren’t a retail establishment, so we didn’t have ties to being anywhere in particular, so we just thought we’d move.”

Wilson says these women have been an incredible asset to the company, and give their full effort on the job. Despite their past or present struggles, the women are fully engaged and genuinely excited to be a part of the company.

“The average for employment engagement right now in America is about 50 percent for 100 percent engagement,” Wilson explained. “That hurts the bottom line of a business so much. Our experience is that the women here are 100 percent engaged and so excited when I hand them a key to the business and say ‘You are one of us, we are all in this together, it’s sink or swim for all of us.’ They bring 120 percent commitment to the job and that is, from a business perspective, huge for a business.”

Teresa Taylor, resident at Amethyst Place, says the community and resources offered to her as a struggling single mother have been life changing. 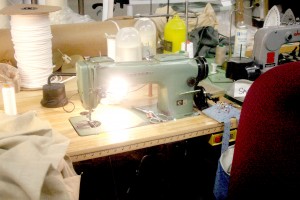 Before moving to Amethyst Place, Taylor was living with her brother after just gaining custody of her two boys. Upon entering the program, Taylor was offered a fully-furnished three bedroom apartment for her family.

“You hear about transitional living and it sounds kind of scary,” said Taylor. “You never know what to expect, and then to walk into this beautiful apartment, it was amazing.

Taylor began working for Weave Gotcha Covered six months after moving to Amethyst Place. Having previous sewing experience, she said she thought it would be a perfect match. She has recently received her GED and is now taking general education courses in college.

Taylor says Amethyst Place and Weave Gotcha Covered have been the catalysts to getting her life back on track.

“Just having that support,” said Taylor, “I’ve been able to be 100 percent honest about everything that’s been going on in my life and to have people support me no matter what is going on. Whether it’s starting college or working with my schedule or having to take off because my kids are sick, or having to do a lot of different things, they support me. They have been mentors toward us, not just for work. It’s been more like friendships.”

Wilson says she is so grateful for Amethyst Place and the opportunity to partner with them to support women in need. Reminiscing about the day everything began, she remembered almost not showing up to hear the call to help.

“I couldn’t find a parking place that day,” said Wilson, “and I almost gave up and didn’t go to that presentation. I was late and I thought, no, I really want to hear this presentation. I found a spot and the rest is history.”

For more information about Amethyst Place, including volunteer opportunities, visit their website.

Elizabeth Orosco is a reporter at KMZU 100.7, follow her on Twitter at @elizabethjulene and send story ideas to [email protected]

A bond reduction hearing is scheduled in Carroll County.