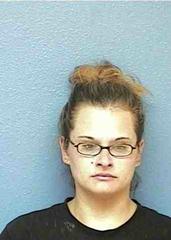 Kirksville Police are attempting to locate Diane Jean Thompson in reference to arrest warrants for Burglary in the 1st degree. Diane Thompson is a white female, 23 years old, 5’3” tall, 160 lbs, with brown hair and hazel eyes. Thompson wears glasses and has tattoos on her neck, right ankle, right shoulder, left foot and left should. Thompson has also used the name Diane Chatfield. Officers have attempted to contact Thompson at her last known residence(s) in Adair County but have been unable to make contact with her.

In November 2010, Diane Thompson pled guilty to 1st degree burglary in a Kirksville Police Department case in which she was accused of entering the home of an elderly couple claiming she needed their assistance with an emergency. Once inside the residence, Thompson stole money from the couple and left. Thompson is suspected of similar offenses in surrounding counties.

Diane Thompson has family and other known ties to Kirksville and it is believed she is still in the area. Anyone with information regarding Thompson’s location is encouraged to contact the Kirksville Police Department at 660-785-6945, (Dispatch) 660-665-5621 or anonymously at 660-627-BUST (2878).

Railroad enthusiasts and their families invited to Marceline this weekend