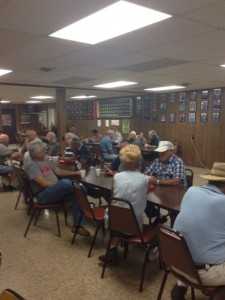 More than 100 men and women turned out at the VFW in Carrollton on Saturday morning.

The second annual KMZU Veterans Breakfast happened at the VFW Post 1773 at Walnut Hills in Carrollton on Saturday.

More than 100 veterans and their family members turned out for the breakfast, which was free to all attendees. A special appearance was made by Senator David Pearce of Warrensburg.

We here at KMZU strive to do whatever we can to honor the veterans who put their lives on the line to keep us safe back home in times of peace and war alike.

KMZU’s Chelsea Wade hosts a Voices of Veterans segment every Sunday evening, where she highlights an area veteran’s story and honors their sacrifice for our country. 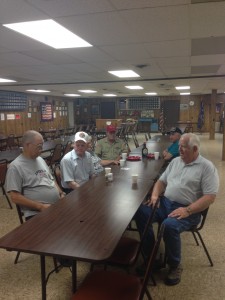 A few men turned out before the breakfast officially got underway at 7:00 in the morning to enjoy great food and better comradery.

The breakfast began at 7:00 in the morning, but some people showed up as early as 6:30 in order to spend as much time with other veterans and the KMZU team as possible.

The breafast would not have been possible without its sponsors. Elliot’s Restaurant in Carrollton made eggs for the attendees, while Life Care Center of Carrollton whipped up enough biscuits and gravy to feed the crowd.

The Carroll County Trust Company sponsored the breakfast with drinks, while McDonald’s in Carrollton provided pancakes, butter, and syrup. All of the men and women who attended said that the food was great, and were extremely appreciative of the breakfast.

Here at KMZU, we feel as though a breakfast is the least we can do to give back to the men and women who have risked their lives to defend the United States. This breakfast was a huge success, and we want to say a huge thank you to our sponsors, the attendees, and of course, the veterans. This year’s breakfast was a great success, and we hope that next year’s event will be even better.

Motorcylce Crash Sends One Man To The Hospital