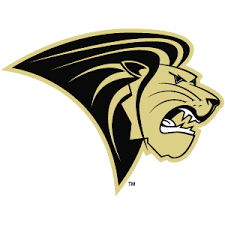 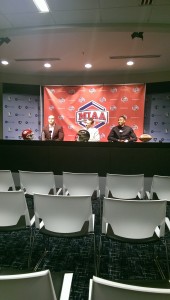 KANSAS CITY, Kan.- On Tueday, at the MIAA football media day, head coach Patrick Ross alongside Jr. LB Connor Harris and Sr. WR Greg Coble spoke about the upcoming 2015 football season.  When the polls were released Lindenwood was selected 10th in the coaches poll, and 11th in the media rankings. Lindenwood received 34 points in the coaches poll, finishing just behind Nebraska-Kearney by five points and having twice as many as Missouri Southern. The Lions return eight starters on offense and seven starters on defense. The top returner on either side of the ball is linebacker Connor Harris, a 2014 All-American after averaging nearly 14 tackles a game last season. On offense, an experience squad could receive a boost from two NCAA Division I FBS transfers who will be fighting for playing time in quarterback Jesse Scroggins (Arizona) and running back Rob Standard (Iowa State).

Patrick Ross, the winningest football coach in Lindenwood history, is in his 12th season as the head coach of the Lindenwood program in 2015. He is in his 14th season overall as a collegiate head coach. Ross owns a career coaching record of 101-48 (.678), his teams have appeared in the NAIA Football Championship Series six times, and twice he has earned NAIA National Coach of the Year honors. After a couple down years, Coach Ross is really excited about the way they recruited this year.

“I think it’s been outstanding for us honestly because right now our recruiting changed a little bit. We were finding those guys who one, weren’t entitled for anything, guys who weren’t front-runners,” says Coach Ross. “If they came to Lindenwood, they chose to come cause they wanted to fight, they wanted to battle, and they want to get this program where we think it should be which is in the top of this league.”

Junior LB Connor Harris has seen this league from both sides of the ball and being the defensive anchor that he is for this Lions team,  he knows that challenges lie ahead.

“Every team here is great, and you come to work every week with a new battle and a new chance to play a great team. You can’t look past any team whether they’ve been down or at the top,” says Harris. “I’m looking forward to the season.”

In 2014, Sr. WR Greg Coble honorable mention all-MIAA selection, team Offensive Player of the Year, appeared in 10 games and started the final two games of the year. He was the team’s top wide receiver for the second half of the season, as he averaged 70.5 receiving yards per game for the final six games of the season and ranked eighth in the MIAA and led the team with 48.2 receiving yards a game. He also led the team with three receiving touchdowns, was second with 482 receiving yards, and was third with 29 receptions. Coble looks to take his success to the next level this coming season and provide much needed stability for the Lions’ offense that’s still looking for a starting QB.

“For us as a receiving core we take the time out for organized team activities.  We set up our own things and work each day on our own timing with each quarterback, ” states Coble.

Lindenwood will open the season at home on Thursday, Sept. 3, 2015 with a 7 p.m. game against Washburn.