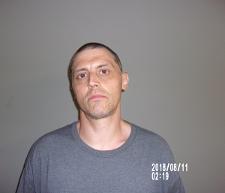 RICHHMOND, Mo.- Formal charges were filed in Ray County Circuit Court against a Lone Jack man found to be in possession of marijuana and suspected of selling it to two subjects near an elementary school.

According to court records, Joseph Peterson, 39, is charged with one count of felony distribution of a controlled substance in a protected location. A filed probable cause statement indicates Peterson was the passenger of a vehicle that was stopped last Friday night, August 10, on Crowley Road south of Highway U during which narcotics were located.

Peterson and the driver of the vehicle were actually stopped a first time by a deputy in the Elkhorn School parking lot prior to being pulled over for an alleged traffic offense on Route U. Seven grams of marijuana packaged for sell were alleged to be in Peterson’s possession at the time of the stop by a Ray County Sheriff deputy.

Peterson remains in custody at the Ray County Jail on a $50,000 cash or surety bond no 10% allowed. Future court proceedings are currently pending.