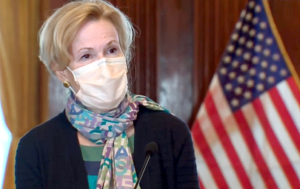 During a media briefing, she said she was there to “provide guidance” and participate in a roundtable discussion with state health and government officials.

“All of us across Missouri, our job is to decrease viral spread and a clear pathway forward together to control this virus. What does that mean?  We need every American and everybody in Missouri to be wearing a mask and socially distancing,” Dr. Birx said.

She didn’t give a full-throated endorsement of a statewide mask mandate, instead offering an option to Gov. Mike Parson that’s being implemented in Texas.

There, counties with 20 or less actives cases of COVID-19 can opt out of the requirement when submitted by a county judge. Counties who are exempt are listed on the state website.

“Every public health official will tell you it is easier to have a statewide mask mandate. If you can get 100 percent of the retailers to require masks as we saw in Branson, it sends the message to the community that masks are important,” Birx told reporters.

Regional counties, like Pettis and Johnson, would fall under that order, but both counties have implemented mask mandates of their own.

The order has been extended until Sept. 14, as the University of Central Missouri begins classes this week and public schools start in-person learning the following week.

“This opens up the opportunity for potentially more exposure. Our our goal is to minimize that exposure by still having people wear their face coverings and see that it continues to work in the next couple of weeks,” Lewis told KMZU.

Birx, who wore a mask during the press conference, told Missourians to refrain from large gatherings.

“You can’t have these large parties because of the level of asymptomatic spread,” she said. “I know we all want to believe our family members and neighbors couldn’t possibly have Covid. I can tell you across the United States they do — and it doesn’t matter if you’re in a rural area or an urban area.”

While Covid numbers in the Kansas City metro area are at a “high plateau,” rural areas need to remain vigilant, she says, citing that 95 percent of counties in the mostly rural state of Alabama have high infection rates requiring a statewide mask mandate.

She said the federal and Missouri data on COVID-19 is a match, which is “critically important.” A governor’s report is generated for each state to provide governor’s a county-by-county analysis to “know precisely where they sit with test positivity.”

She was complimentary toward Missouri’s “box-in approach” to long-term care facilities to guard against the spread of the coronavirus. Knowing the virus is contracted primarily from staff to residents, Birx says the federal government is getting more tests in the hands of nursing homes in recent weeks. 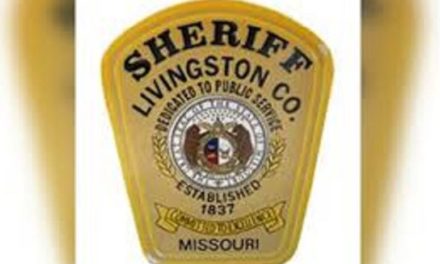 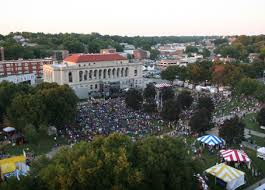