JEFFERSON CITY, Mo. — The Missouri Department of Conservation is seeking public input on a proposed limited hunting season for black bears, which would be open only to Missouri residents. 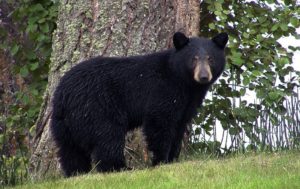 If approved by the Missouri Conservation Commission, a season could occur as soon as the fall of 2021. The department is asking for initial public comments through June 5.

According to MDC, over the last 50 years bear numbers in the Missouri Ozarks have increased significantly and today Missouri is home to between 540 – 840 black bears. Bear numbers are currently increasing each year and bear range in the state is expanding.

“With Missouri’s growing black bear population, MDC is proposing the development of a limited and highly regulated bear hunting season,” said MDC Furbearer Biologist Laura Conlee. “The hunting season would provide Missouri residents with the opportunity to participate in the sustainable harvest of a valuable natural resource. The timing and length of the season, restrictive methods, and permit allocation coupled with a harvest quota will initially be limited to ensure a sustainable harvest of our growing black bear population.”

Conlee added that limited black bear hunting will be an essential part of population management in the future as Missouri’s bear numbers continue to grow.

Comments may be made at mdc.mo.gov/bears