MDC releases information on the invasion of two insect species

JEFFERSON CITY, Mo. — This year, an increased presence of Japanese beetles and Emerald Ash Borers (EAB) are makes them one of the most despised pests of 2017. The Missouri Department of Conservation consulted an entomologist to help people tell the difference between the two. 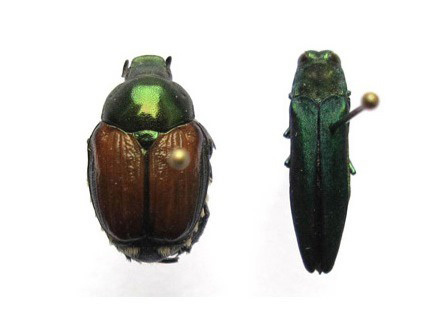 MDC Forest Entomologist Robbie Doerhoff said, “It’s easy to tell these two beetle species apart, even though both are metallic green in color and about a half-inch long. EAB is slender and bullet shaped, while Japanese beetles are much wider and have copper-colored wing covers.”

According to a news release, Japanese beetles are easy to find throughout the state and can feed on more than 300 types of plants. Usually present in June and July, they feed on the upper surface of leaving behind the leaf veins.

EAB only feed on ash trees and do not congregate in large quantities like the Japanese beetle. They are estimated to kill over 99% of ash trees it attacks within three to four years of infestation.

Treatment for the two insects vary. Doerhoff recommends, “If you decide to use insecticides, select a product labeled for Japanese beetles and the plant type you want to protect. To avoid killing beneficial insects such as bees and butterflies, don’t apply insecticides to blooming plants,”

For EAB, treatment may require a certified arborist of the tree is over 20 inches.

For more information on either pest, visit the MDC website at www.mdc.mo.gov.