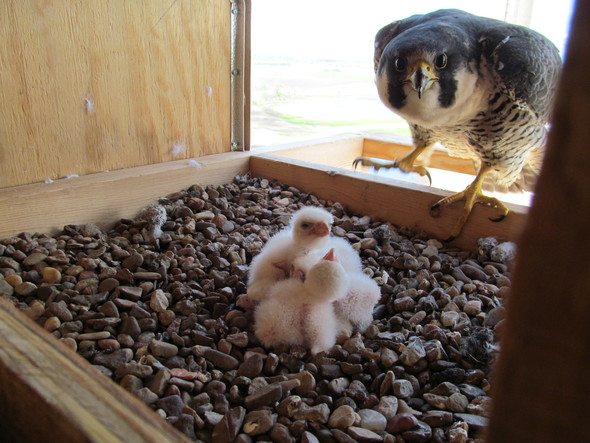 PRESS RELEASE: Kansas City, Mo. – Peregrine falcons are once again tending nests in the Kansas City area, and the public can watch one pair tend eggs and raise young online. A web camera is aimed at a nest box atop the American Century Investments office building near the Country Club Plaza. Four other nests are active with nesting falcon pairs, said Joe Debold, urban wildlife biologist for the Missouri Department of Conservation (MDC).

“All nests have eggs and incubation is occurring,” DeBold said. “They should hatch in mid-May.”

Peregrine falcons are acrobatic, high-speed fliers. They historically nested on ledges on cliffs or bluffs. An endangered species in Missouri, their numbers have been increased in recent decades thanks to nest boxes placed on high places in urban areas. Peregrine falcon restoration is a partnership between MDC, private businesses, and other conservation partners.

The adult falcons brave wind, rain, cold, sun, and sometimes hot days as they tend nests and eggs in high places. People can watch on the computer in the comfort of home or office. In early weeks, the adults take turns incubating eggs. They leave to hunt pigeons or other food and often return with food to the nest. Then the day arrives when the eggs hatch and the fuzzy baby falcons emerge. Parents come and go with food for them. Finally, it is surprising to see how fast the young grow and mature. They fledge or leave the nest in summer.

To watch a falcon pair tend eggs and then raise young at the American Century building, visit https://short.mdc.mo.gov/Zny.

For more information about peregrine falcons in Missouri, visit https://short.mdc.mo.gov/ZqA. 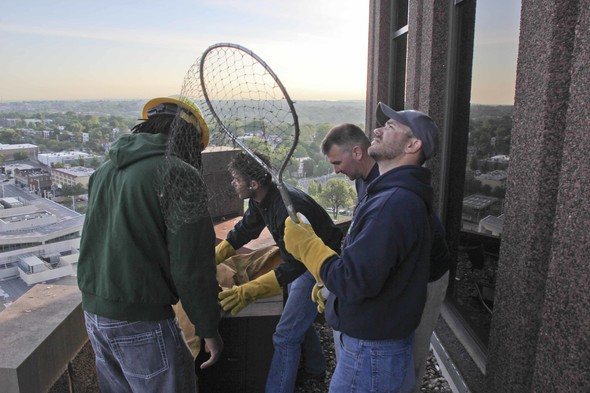 In between the chicks hatching and fledging, MDC staff will visit peregrine falcon nest sites to band young falcons. The leg bands have enabled biologists to track falcon movements across the Midwest and South, and sometimes their return to Kansas City to raise their own young. This nest site is on a ledge at American Century Investments in Kansas City. Photo by Bill Graham, Missouri Department of Conservation

Top photo: People can watch peregrine falcon pairs incubate eggs and feed newly hatched chicks via a web camera streaming video from a nest on a ledge at American Century Investments in Kansas City. These falcons hatched in earlier years. 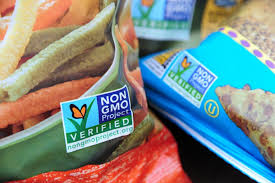