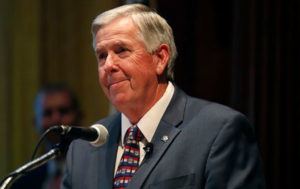 Winners will be drawn every two weeks beginning Aug. 13 and ending Oct. 8. Previously vaccinated and newly vaccinated adults and children are eligible. Teenagers ages 12 to 17 will win $10,000 scholarships.

Missouri lags about 10 percentage points behind the national average for people who have initiated shots.

The goal of the incentive program is to ramp up Missouri’s current 40% vaccination rate, Parson said during a news conference outside his Capitol office.

“I’m depending on you and your families to make the right choices,” Parson said.

Missouri is pairing the chance for a big win with an opportunity for local health departments to give out $25 to each new vaccine recipient.

Combined, the two incentive programs will cost at least $20 million. Robert Knodell, who has been the acting state health director, said the money would come from state funds and federal aid.

Lawmakers and statewide elected officials, including Parson, and their families are not eligible for the vaccine lottery.

Parson has said he’s hesitant to offer prizes or other rewards for doing something that he considers a personal responsibility. But he’s also said he’ll consider all options to increase the vaccination rate; the delta variant is driving a COVID-19 outbreak among unvaccinated Missourians.

Parson also announced he picked Don Kauerauf to be the state’s next health director.

Kauerauf served as the Illinois Public Health Department’s assistant director from 2016 to 2018. He also worked at Illinois’ Emergency Management Agency, which he said gave him experience making quick decisions and taking action.

Unlike former Missouri health Director Dr. Randall Williams, Kauerauf is not a doctor. He earned a degree in occupational safety and health from Illinois State University.

Williams left the job in April without publicly citing a reason. Parson named his deputy chief of staff, Robert Knodell, to temporarily lead the agency while he searched for a permanent replacement.