“Last year at our annual gala we really wanted to focus on on our mission, which is to cultivate the future of agriculture. And so at the auction we asked people to donate to first-time exhibitor grants, and we had an overwhelming support from our donors who supported that endeavor.”

That fundraiser generated around $13,000 which provided 26 grants to 32 first-time exhibitors for the 2020 Missouri State Fair.

“From a fair perspective, it was very different and that we just had a junior livestock show, the most important part of the fair we were able to maintain. From a fundraising standpoint, the dinner and auction gala, we do it the night before the fair was not held. And so we didn’t raise money for the 2021 grants. That’s been a little devastating to us as a foundation.”

Covid concerns canceled this year’s gala, a driving force for donations. Loges tells how the foundation had to get creative.

“We have had, as a result of, something really cool that is happening, is that we have some of our 2020 first-time exhibitors have set up Facebook fundraising events, where they’re raising money to pay it forward for next year’s recipients. We have about 12 kids that are doing that right now.”

Loges says a multi-pronged mission is to keep the fair going strong.

“The Missouri State Fair Foundation was put in place by the Missouri State Fair commission to provide financial support to the fair. The fair does not receive any operating funds from the state of Missouri. Those funds are generated during the State Fair in off-season events, and with almost four hundred acres here at the state fair, there aren’t enough monies to preserve and improve the 64 buildings here that are on the National Historical register. So, that’s one of the things that we do is preservation. We also focus on making improvements to the fairgrounds and we support the overall mission of the fair, which is agriculture.” 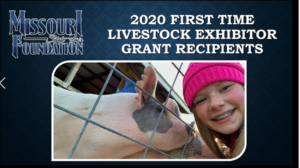 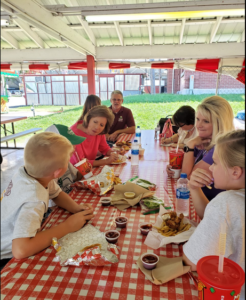 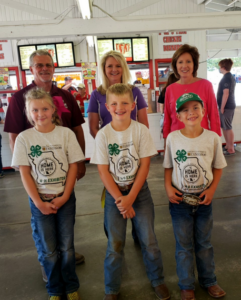 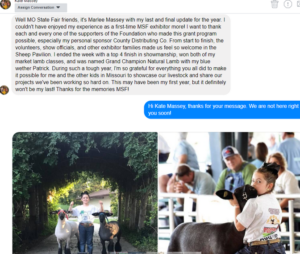 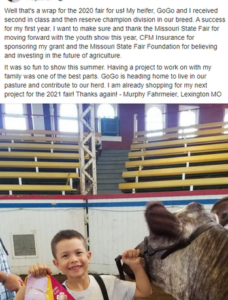