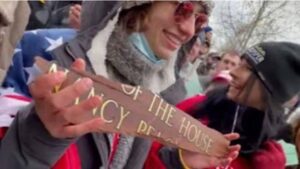 Emily Hernandez of Sullivan, Mo. was charged Friday in federal court in Washington, D.C., in connection with the Jan. 6 D.C. riot. (From court records via the Kansas City Star)

WASHINGTON (AP) — A Missouri woman was charged in Washington D.C. federal court on Friday in connection with the Jan. 6 riot in the U.S. Capitol. Charges filed against Emily Hernandez, of Sullivan, Mo., stem from videos where she allegedly held part of the splintered name plate to the entrance of House Speaker Nancy Pelosi’s office. Hernandez faces five counts that include illegally entering a restricted area with intent to impede or disrupt the conduct of government, and stealing or disposing U.S. property.

According to the FBI, the agency received online tips from at least three people identifying Hernandez as the person seen in TV news footage holding up up a broken piece of wood engraved with the words “House” and “Nancy” during the storming of the Capitol. Hernandez had not been arrested as of early Saturday afternoon, according to court documents. Her home phone number rang unanswered.

Hernandez’s is hometown along I-44 is about 60 miles southwest of St. Louis.

With additional reporting from the Kansas City Star.