More From the Western Farm Show 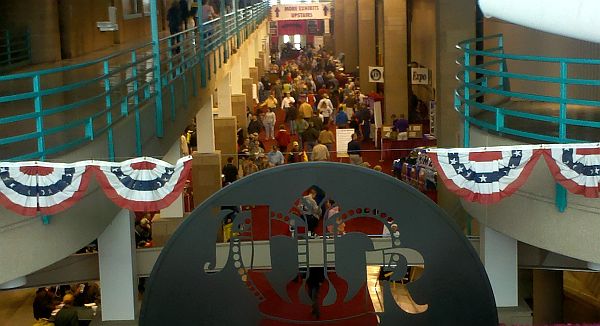 Crowds packed the American Royal Complex for the Western Farm Show this weekend. KMZU's booth is on the right near the main entrance.

Day two of the Western Farm Show has proved to be productive for those working the show.  Crowds poured into the American Royal Complex anxious to take in the event.  Any down time exhibitors experienced on the first day of the event had made of for on day two.

The Saturday reports kicked off with Dr.  Alan Wessler who discussed the animal rights movement and its impact on Agriculture.

Charlie Hinkebein, a member of the 100 Bushel Club, discussed some of his farming techniques.

KMZU hosted Daren Williams with NCBA for the first session of the day.

Several FFA chapters attend the Western Farm Show each year but many schools decided not to travel due to the recent snow.  Marshall FFA Advisor Randy Plattner was going to bring students to the show Friday but the trip was canceled.  Instead, the Plattner family is taking in the show.

The MO Chip Program was on hand for the first couple days of the WFS.  According to Brad Fowler, many are surprised to learn that girls ages 14 to 18 is a common demographic when it comes to missing children.

The Southwestern Association manages the Western Farm Show.  CEO Jeff Flora says there will be plenty of things for people to see on Sunday at the event too.

On Suday the Western Farm Show will be open 9 a.m. through 4 p.m.

Not Much Change Seen In Crop Conditions