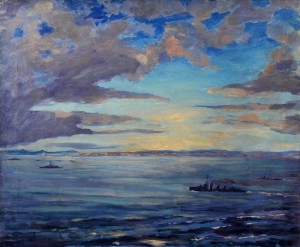 Firth of Forth Churchill Painting

According to a recent press release from Westminster College, two Churchill paintings and several artifacts from the permanent collection of the National Churchill Museum (NCM) on the campus of Westminster College in Fulton, MO will be on display for the R.M.S Queen Mary’s 80th anniversary celebration as part of collaboration between the two historic organizations.

“This exhibition allows the National Churchill Museum at Westminster College to share our collections and story with audiences on the West Coast,” says Timothy Riley, Director and Chief Curator of the NCM.  “To showcase Churchill on board the Queen Mary, a ship he sailed upon in times of war, and in peace, and an historic and majestic link between the United States and Britain, is a splendid opportunity.”

Entitled “Passion for Painting: The Art of Winston Churchill Exhibit Aboard the Queen Mary,” the exhibition will open May 27, 2016, and includes the Museum’s oil paintings Firth of Forth (1925) and Boats at Cannes Harbor (1937) as well as other artifacts from the National Churchill Museum such as Churchill’s leather travel clock, which he used when traveling on the luxury liner; the British flag which was placed on stage at Westminster College with Churchill at his “Iron Curtain” speech at Westminster in March 1946; and a never-before exhibited letter Churchill wrote to  his eldest grandson Julian Sandys while traveling on the Queen Mary.

Also included in the exhibition are eight paintings from the private collection of the family of Julian Sandys- currently on loan to NCM.

The exhibition will be on display through December 31 in the new art gallery, which was built in the ship’s former third-class smoking room, a lounge used for drinks, conversation and card games.

The 80th anniversary celebration will begin with a gala dinner May 26 on board with remarks from Churchill’s great-grandson Randolph Churchill and Lord Alan Watson, a Churchill scholar.  The art gallery will then be dedicated the following day on the official anniversary of the Queen Mary’s original departure.  Public admission will be free.

To find additional background on the exhibition and a catalogue of presented works, please go to

A hearing is scheduled in a Ray County firearms case