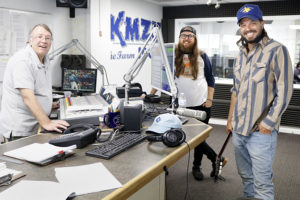 CARROLLTON, Mo. – Every hit song starts with a talented and creative songwriter.

Although you may not be familiar with the name Ben Burgess, you have probably heard some of his work. The country music singer and songwriter has worked with many big-named country music stars and has even written songs you have heard right here on KMZU.

Burgess talks about who he  has worked with in the past.

“I’ve had the pleasure of getting a couple of songs published, I’ve got the Morgan Wallen “Whiskey Glasses.” That’s the one y’all have probably heard. Tyler Rich’s “The Difference,” which made it Top 20. Dierks Bentley, Jake Owen, I’ve just been blessed.”

He’s especially thankful to Morgan Wallen who got Burgess’ first song on the radio.

Burgess, who is originally from Texas, currently lives in Nashville, Tenn., but has ties to Higginsville in Lafayette County.

The success Burgess has found in songwriting has now led to more opportunity’s as a singer. Burgess is featured on  the song “Heartbreak,” which was part of the album “Snake Oil” produced by famous DJ Thomas Pentz, better know as Diplo.

“This is a song that Dilpo put out on his new album “Snake Oil.” Shout out to Diplo. We are very excited about it; we wrote it about breaking up,” he said of his collaboration.

The recent found success seems to have the 35-year-old singer/songwriter on the rise in country music. Burgess talks about some exciting opportunity’s he has coming soon.

“Right now, me and Morgan (Wallen) are working on a song together. On his upcoming album, I’m going to possibly have one on there with him. It’s going to be called “Outlaw”.”

After signing a deal with Big Loud Records, Burgess’ stars are aligned to have more success –  not only as a songwriter but also as a singer.

Sedalia Man Due in Court