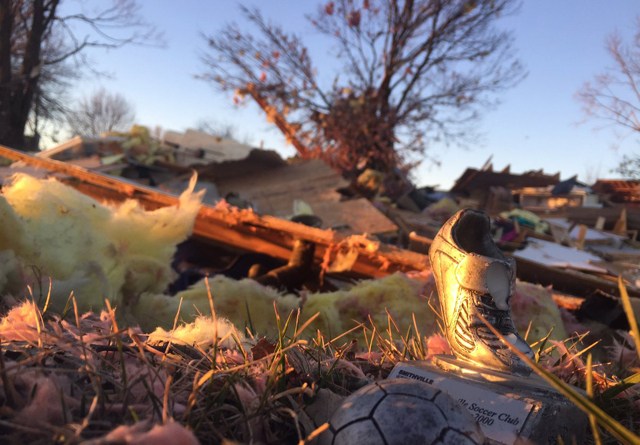 SMITHVILLE, Mo. — While official cost estimates are not yet available, Smithville Police Chief Jason Lockridge told KMZU News he “wouldn’t be surprised” if the total cost of damage from the tornado that roared through the city that sits on the border of Clay and Platte Counties exceeds $10 million. KMZU’s Bran Lock talked with Chief Lockridge about the damage from the storm and what the city is doing to pull together as a community to rebuild their homes and lives as quickly as they can. Click below to hear the edited Newsmaker interview that aired live on KMZU.

“The tornado effected the northern-most part of our city,” Chief Lockridge told KMZU News. “Probably about 20 percent of the city was damaged.”

The tornado that passed through the Smithville area was rated just days after the storm as an EF-2 by the National Weather Service in Pleasant Hill. Lockridge said the community is lucky more damage wasn’t inflicted.

“We had six residences that sustained severe damage to the point that they were uninhabitable,” Lockridge went on to say. “Seven to eight structures that were deemed to have major damage and then another 350-plus that have some sort of damage. Whether its fences, trees, stuff like that.”

While some residential areas were seriously effected by the strong storm, businesses and community buildings fared better.

“We were very fortunate we didn’t have any infrastructure damaged,” Lockridge told KMZU News. “We didn’t have any businesses damaged or faith-based community buildings or anything like that. It was all contained to a residential area, and mostly three neighborhoods, with one being the hardest hit.”

Lockridge said that what struck him most about the storm wasn’t the physical damage, but the community’s reaction to the carnage from the storm and their willingness to band together and be thankful to just be alive.

“Residents of these neighborhoods came together to help each other clear debris, remove trees, make sure everybody’s taken care of, everyone has a place to stay.”

The community is not resting on its laurels. Citizens are already hard at work rebuilding a sense of normalcy in the town.

“We are already seeing houses with minimal damage being repaired, the ones with major damage, those are going to take longer.”

While the community has a positive outlook on the future, the financial figures from the damage are a cloud that hangs over residents and community leaders in Smithville.

“We don’t have final numbers yet,” Lockridge said about the costs associated with damage from the storm, “just the repairs to homes alone are going to be measured in the millions.” He went on to say, “It’s not going to surprise me to see the damage to the community close to $10 million.”

Helping the community recover and rebuild their lives has been an unexpected and difficult challenge, but a rewarding one, Lockridge suggested.