It’s wickedly dark and goopy as the melting Wicked Witch in Wizard of Oz.

Even your mangy little dog likely whimpers when it sees the unsightly blob take on a life of its own during cool, wet weather. Despite its gruesome appearance, this genus of cyanobacteria does not harm plants or animals, says Miller.

Its single-celled organisms form threadlike structures called filaments. These filaments form colonies held together by a jelly-like substance. This allows cells to communicate and share nutrients over a large area. 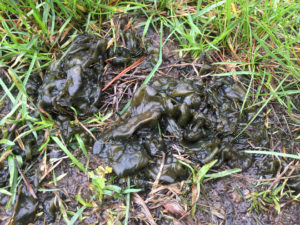 Nostoc fills in spaces where grass cannot grow, including wet areas, compacted soil and soil with high phosphorus levels. It can grow in large, slippery mats on rocks, sidewalks and soils. Good drainage and proper mowing reduce its ability to survive.

Miller says there are options for removal. When it is wet, remove with a flat-edged shovel by skimming it off. When dried, scoop up with a metal-pronged rake. After removal, aerify or verticut turf areas to reduce soil compaction and fix drainage problems first, and overseed.

If chemical intervention is necessary, spot-apply pelargonic acid (sold under the brand name Scythe) to wet, active colonies. Potassium salts or ammoniated soap of fatty acids may also have limited activity. Both of these will damage other plants so avoid contact and drift. Nostoc is not a plant, so glyphosate and other herbicides will not control it. These herbicides might result in larger colonies by removing plant competition. 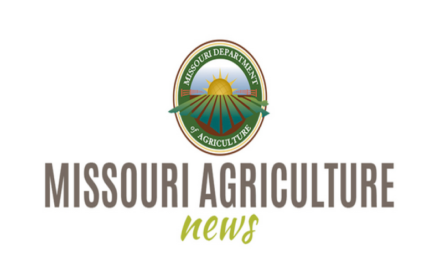 CONSUMER PROTECTION ALERT: From the Missouri Department of Agriculture