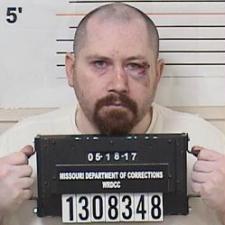 LAFAYETTE COUNTY, Mo.- According to release from Kristen Ellis Hilbrenner, Lafayette County Prosecutor, and Odessa man was sentenced on May 15, 2017 to 17 years in the Department of Corrections following a guilty plea.

Sean Knox, 32, plead guilty to felony rape in the first-degree and because the nature of the charge he was initially facing the possibility of up to thirty years in prison.

According to the report the victim reported to detective with the Lafayette County Sheriff’s Office that she had been sexually assaulted by Knox. The victim also stated she had gone to a friend’s home on the night of October 9, 2015, and Knox, who also resided at the home, provided her with alcohol which she consumed as part of a drinking game.

At some point the victim reportedly became ill, vomited, and then passed out on the couch in the living room. Later that night Knox woke the victim, asked her to go to bed with him, and she refused. The victim woke up again later to discover Knox had removed her clothes and was raping her.

The victim attempted to push Knox off but to no success. Knox reportedly when finished kissed the victim on the forehead and apologized.

Judge Dennis Rolf followed the State’s recommendation, pronounced the seventeen-year sentence and remanded the defendant to the custody of the sheriff for delivery to the penitentiary.

After the hearing Hilbrenner stated, “This victim went to the home of someone she trusted and thought she would be safe.  Instead, she was sexually assaulted by an individual who knew she was too intoxicated to consent to anything.  He took advantage of the fact that she could not fend him off after she had already made it clear she was not interested in him. Once again, this prison sentence can not undo the trauma that was caused to the victim, but we are glad to finally see her get the justice she deserves.”

Norborne Board of Aldermen Preview