An Odessa resident was injured in a crash Tuesday afternoon in Lafayette County.  The crash occurred around 5:15 p.m. on Route O, less than two miles north of Interstate 70.  The Highway Patrol reports a hay rake being towed by Roland Davis, 65, of Mayview, struck a guardrail.  It slid into oncoming traffic and hit three other vehicles. One of the drivers was injured.  Cynthia Tholen, 59, was transported by air ambulance to Research Medical Center with moderate injuries.  Two Odessans, Matthew Rorbig, 34, and Logan Seals, 30, were also involved in the accident.

Man Run Over by Own Vehicle 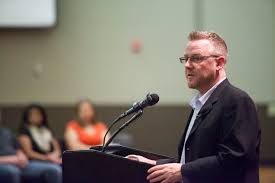 Authorized biographer for Ray Bradbury to make appearance in Marshall