UPDATE: One dead following crash on I-70 in Cooper County

A crash report says, after the car hit a concrete barrier, the driver, Chantel Winfield, 35, was attempting to exit the vehicle as it was struck by a westbound semi truck. Winfield was pronounced deceased at the scene. The truck driver was uninjured. Winfield’s car initially slid on an ice-covered portion of road.

COOPER COUNTY, Mo. — One person is dead Wednesday morning following a crash on I-70 in Cooper County. 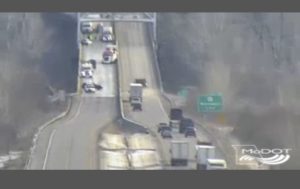 The crash occurred at the westbound Missouri River bridge around 6:45 a.m. As of 8:30 a.m. one westbound lane is open. Both were closed at the time of the crash east of Boonville.

The crash involved a semi-truck and another car. Along with the death, two others reported minor injuries.

Troop F of Highway Patrol is reporting drivers to expect delays. The deceased has not been identified.