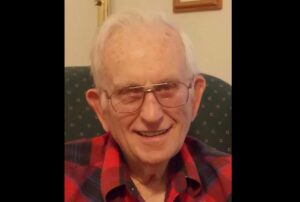 A visitation will be held from 10:00 a.m. to 11:00 a.m., Wednesday, November 25, 2020 at the Ralph O. Jones Funeral Home in Odessa.  FACE MASK ARE REQUIRED, NO EXCEPTIONS.  A graveside service with military rites will follow at 11:00 a.m., Wednesday, November 25, 2020 at the Odessa Cemetery.  If you cannot stand for an extended period of time, please bring a chair.  Memorials are suggested to the Charity of Donor’s Choice.  Memories of Phillip and condolences for his family may be left here or here.

Phillip was born on November 11, 1932 in Aulne, Kansas to Fred and Viola (Criger) Zeih.  He was a graduate of Odessa High School in Odessa, MO.  Phillip was a veteran of the United States Army and earned a Korean Service Medal with 2 Bronze Stars, the National Defense Service Medal, Meritorious Unit Command GO 116, UN Service Medal, Mert Unit Command GO 512 EUSAK.  On April 2, 1955 he married Shirley (Claunch) Zeih in Odessa, MO.  She survives of the home.  Phillip retired after 25 years from OLIN Lake City Army Ammunition Plant in Independence, MO.  He was Baptist by faith.  Phillip was a member of the Odessa VFW Post 5675.  In addition to spending time with family and friends, Phillip enjoyed music, especially playing guitar.

In addition to his parents, Phillip was preceded in death by a brother and sister-in-law, Merle Zeih and wife Marie.