PLATTE COUNTY, Mo – A press release from the Platte County Sheriff’s Office has detailed a fatal crash that occurred at approximately 9:37 a.m. on August 2, 2016. 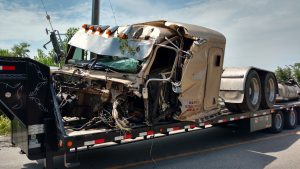 Released photo of the crash

According to the release a 2005 Peterbilt semi-tractor with a dry hopper trailer was traveling north on Mo-45 near the intersection of Iatan Road in Platte County when it crossed the center line. The tractor went down an embankment on the west side of the highway, striking a tree which stopped the truck. The unidentified driver of the vehicle was transported to Mosaic Hospital in St. Joseph by ambulance where he was pronounced dead shortly after arrival.

While a preliminary investigation does not indicate any known contributing factors, the accident investigation is still ongoing and will be conducted by the Platte County Sheriff’s Office . The identity of the driver is being withheld at this time to allow for family notifications. 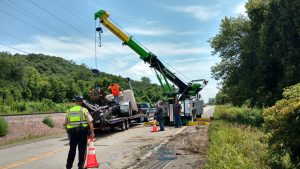