JEFFERSON CITY, MO  Quail and pheasant hunting season is coming up and the Missouri Department of Conservation reports the bird numbers appear to be good despite flooding and harsh conditions last fall.

The MDC charted the quail and pheasants in August and reported seeing around the same numbers as last year. The surveys in Missouri are conducted along roadside stretches of 30 miles. 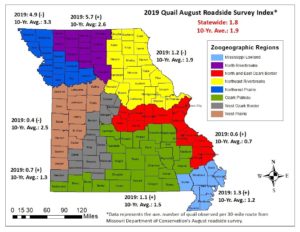 MDC Resource Scientist Beth Emmerich said they have been doing these types of surveys since 1983.

“It represents the best way we have to track quail and pheasant populations on a statewide basis,” Emmerich said. “The survey does a good job of tracking large-scale population changes and is a good barometer for how more localized populations may also be doing from year to year.”

In 2015 the MDC reported seeing the highest number of quail and pheasant in nearly 10 years.

MDC Small Game Coordinator David Hoover said the numbers appear  around the same except for  the Northeast River breaks and Western Prairie regions where numbers were notably down.

“The amount of quality habitat is the most important factor for maintaining quail and pheasant populations, but weather also plays a very important, and often unpredictable, role,” Hoover said.

The weather was good for birds Hoover said.

“The wetter-than-normal conditions this spring and early summer likely benefited birds in areas with good habitat due to the unusually high number of crop field acres that did not get planted and were left fallow for much of the summer,” Hoover said. “While not good for farmers, it was good for quail and pheasants as it created near ideal brood-rearing conditions.”

For information on places to hunt quail and pheasants on public lands, check out MDC’s Small Game Hunting Prospects.