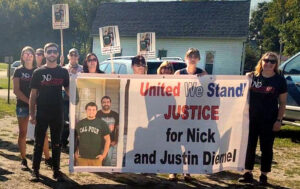 Part of the group who marched for justice for Nick and Justin Diemel in Braymer. (Lisa Diemel Facebook photo)

The murder trial of Garland Nelson of Braymer will now take place in the 17th Judicial Circuit in Johnson County. After two weeks of back-and-forth talks between the state and Nelson’s attorney on a new location away from Caldwell County, the order was approved on Sept. 15.

BRAYMER —  Two Wisconsin brothers who were murdered in the Braymer area in 2019 were remembered Sept. 12, as Braymer residents gathered to show support to the family of Nick Diemel, 35, and Justin Diemel, 24.

More than a year after their disappearance, Nick’s wife, Pam Diemel, and other Diemel family members came to Caldwell County to collect the remains of their loved ones. They made their presence known with a march for justice in the hometown of the accused Garland Nelson.

“Thank you to those that chose to join us walking, whether in person or spirit,” Lisa Diemel wrote on her Facebook page. “There were supporters from baby to age 80-plus years old that came from throughout Missouri, Kansas and Wisconsin … Everyone kept a good pace and made two laps around town – one for each of the guys. Thank you to our Braymer friends for standing with us.”

When they returned to Navarino, Wisc., the family was received with a firefighters’ escort into town, according to TV station WBAY.

The brothers were killed after traveling to Missouri to collect money on a bad debt by Nelson in July 2019. They disappeared after visiting his farm and their burned remains were later found in Missouri and Nebraska.

A wrongful death lawsuit against Nelson’s mother, Tommie Feil, and the family’s company, J4S Enterprises, resulted in $2 million in damages in May.

During the past two weeks, Nelson’s attorneys have negotiated with the court for a change of venue for his trial setting. His criminal hearing was originally scheduled for June 22, but was canceled due to restrictions caused by the pandemic.

Higginsville Board of Alderman Meet Tuesday