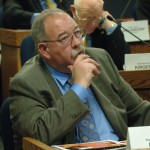 State Representative Mike Lair has been appointed to the national Educators for Romney Committee.  Click to hear KMZU’s Kristie Cross speak with Lair:

Lair said he thinks one reason the Romney-Ryan campaign chose him is because of his experience both as a teacher and as a multi-term member of the Missouri General Assembly.  He also believes he has a fairly realistic view of education reform.  “I feel like I don’t want change something just for the sake of changing it,” said Lair, “But on the other hand, especially with failing districts, you can’t expect to do the same thing over and over again and get different results.  He also credits his leadership on the House Education Committee.

With the next four weeks expected to be busy, Lair said he does not expect the National Honorary Co-chair position to have a significant impact on policy.  “But hopefully, eventually we’ll be able to get a seat at the table and be able to talk a little bit about what rural America, and specifically rural Missouri, needs as far as education.”

“Heat Is On” Campaign This Weekend