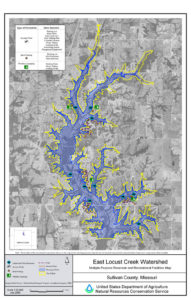 MILAN, MO – A project in north central Missouri, a long time in the making, was begun initially in response to a lack of potable water sources.

Plans for the East Locust Creek Reservoir, to be located near Milan, were first conceived of around three decades ago. It is designed to perform three main functions, providing a water source,  recreational location, and flood mitigation.

The decades old water shortage risk is apparently greater than most people realize. It has also affected the cost of utilities in the area.  This, in turn, also drives away potential investors, and has led to barren economic potential.

The reservoir was designed for multiple purposes, not only as a water source. With recent flooding, residents south of the reservoir will benefit from the mitigation of potentially $225,000 in flood damage per year .

Several permits are pending before the reservoir can be constructed.

Scott is hoping construction begins in early spring, or winter.

Carrollton Board of Education