Ramon Santiago slugged a pinch-hit solo home run in the bottom of the 10th inning to give the Tigers a 2-1 victory over the Royals. Billy Butler hit a sac-fly to score Alex Gordon in the seventh for Kansas City, which had won two in-a-row. Royals first baseman Eric Hosmer says it was a difficult game to lose.
Joaquin Benoit earned the win in relief for Detroit, which snapped a two-game slide.  Aaron Crow took the loss for the Royals. The rubber game of the three-game series tonight in Detroit. Felipe Paulino for Kansas City. Rick Porcello for the Tigers.

Edwin Jackson tossed seven innings of one-run ball as the Cardinals clipped the Brewers, 2-1.  Jackson also drove in the first run for the Cards, who have won four-of-five.
Fernando Salas locked down his 23rd save of the season.  Shaun Marcum gave up two unearned runs in seven frames for the tough-luck loss.  Milwaukee had won three straight. Game two of this all-important series tonight at Miller Park. Jake Westbrook for the Redbirds. Lefty Randy Wolf goes for the Brewers.

The Chiefs finished up their pre-season practice schedule yesterday as they get set to head out to Green bay for their final pre-season game tomorrow night. Head Coach Todd Haley says the starters will get some work.
As long as the plan doesn’t focus on improved punting. Chiefs-Packers at Lambeau tomorrow night.

The High School Football Game of the Week features the oldest rivalry in Missouri High School Football: it’s the Bell Game pitting the Brookfield Bulldogs and Marceline Tigers. Bulldog Head coach Nile Thudium says the atmosphere in Brookfield Friday will be electric.
Kick off is at 7:00. Pre-game begins at 6:45 on 103.9 KRLI.

Texas A&M is denying a New York Times report that says the Aggies have sent a letter to Missouri Chancellor and Big 12 board chairman Brady Deaton informing him they were leaving the conference. The Aggies have expressed interest in the SEC and formally told Big 12 Commissioner Dan Beebe last week that they are exploring their options and asked for the conference to outline the process if they decide to leave.

San Francisco 49ers running back Frank Gore has accepted a three-year contract extension through 2014, according to one of his agents. The package is worth $21 million, with $13.5 guaranteed. Gore ran for 853 yards in six games last season and needs 931 yards to become the team’s all-time leading rusher.

Pujols Taking His Talents to Anaheim 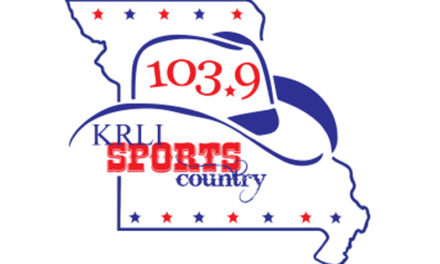