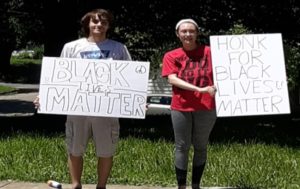 Peaceful demonstrations in Carrollton in 2020.

Missouri – Several protests had been planned in rural areas according to various posts Wednesday.

The Marshall Police Department says they will support the Black Lives Matter march scheduled for June 7 at 4:00 PM. A post by police attempts to ensure the community, the event will be peaceful. In another post Wednesday, Bates County Sheriff, and Butler police said they had been aware of an organized protest for several days, scheduled for yesterday on the square. They had been assured the demonstration would be peaceful. Macon County sources also said organizers planned a protest in Macon.

The Carrollton Police Department said some individuals are exercising their First Amendment Rights to peacefully assemble at 4th St. and Main St.

“Every officer in my department has taken an oath to support and defend the Constitution of the United States and as such,” Looney said. “We will take no action to limit an individual’s right to assemble so long as they do so in accordance with applicable laws.”